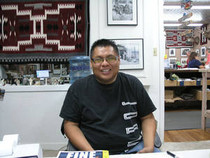 Alex Sanchez (1969-) is of Navajo and Zuni heritage. He was born in Mexican Springs, NM and has made his life there with his wife and three daughters. Alex is the younger brother of Myron Panteah and Brad Panteah. Alex has been making jewelry for over ten years. His technique is a wonderful blend of contemporary and traditional styles. Alex works in heavy gauge sterling and 14K gold. He chooses his stones carefully and works them into his petroglyph patterns which are appliqued onto the heavy gauge sterling silver. Alex has developed a flair for unique combinations of design and color.

Alvin Monte was born in Socorro, New Mexico, Alvin Monte grew up in Canoncito, New Mexico. He graduated from high school there. He is married. Also, teaching his nine-year-old son, who shows silver smithing talent. His son is already making bracelets. As a pastime Alvin Monte enjoys drawing, fishing and camping.

Alvin Monte works in both gold and silver, often making his own stamping tools. Although his parents were silversmiths he is self-taught. The inspiration for designs can come to him in dreams he says or from petroglyph or Pueblo designs. 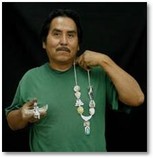 Bennie Ration, Navajo, was born March 21, 1955 on the Canoncito Navajo Reservation in New Mexico to Frances and John Ration. Benny grew up watching his father making jewelry and by age eleven was making his first pieces. His father told him that no matter what else he did with his life he would always have silversmithing to fall back on. Throughout his childhood, Bennie was a talented artist. After he graduated from high school, he enrolled in a one year program at U.S. Silkscreen and Graphics School in Scottsdale, Arizona. Upon completion of the course he worked for three years as a silkscreener and graphic designer. In 1978, he "fall back” on the art of silversmithing. With a look and style that he had developed as a graphic designer, he began making three-dimensional figures in silver. He became inspired to make three-dimensional spiritual beings like those found in ancient rock art. His many wearable, art designs include kachina figures, Southwestern animals, feathers and Navajo inspired geometric patterns. When asked how he comes up with his designs, he says, "I remember what I see and make pieces in my mind.” Benny is considered by many as one of the greatest contemporary Indian jewelry silversmiths of our time. His jewelry is collected by collectors and enthusiasts all across the world. 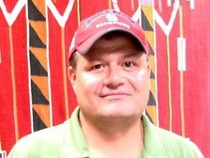 Born in Twin Lakes, New Mexico in 1966, Daniel “Sunshine” Reeves is an award-winning Navajo artist of many talents. Sunshine learned the art of silversmithing from his older brothers at the age of 24 and has since become an innovator in the realm of his craft.

From bracelets and belt buckles to boxes, knives, bowls, and candle holders, Sunshine Reeves’ intricate stampwork on silver is rooted in tradition with eyes toward the future. He has earned many accolades throughout the years, including Best of Show at 1997 Santa Fe Indian Market and Best in Class in 1998.

“Most people have no idea how complex the process is to create these unique art forms,” says Sunshine Reeves. His work is more than simply a piece of jewelry or a box -- it is an art form. On an average piece, Sunshine will use 10 to 20 different handmade stamps to create the unique patterns for which he is so well known.

Sunshine's work is collected throughout the world, including Japan, Europe, and Korea. His work is exhibited in galleries and museums across the country. 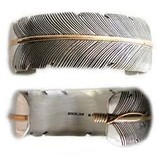 Harvey Mace has been a silversmith for 25 years. He was born in 1957 at Ojo Encino on the Navajo reservation near Cuba, New Mexico. he learned to make jewelry from his older brother and for many years worked as a piece worker for shops in Gallup and Albuquerque. Piece work jewelers are given stones and silver by different shops, fiver designs to execute and are paid by the piece when they bring the jewelry in. While Mace enjoyed working out of his home, he felt stifled by the various shops. Yet he didn't want to go into business for himself, spending time he could be creating jewelry, traveling around, and selling his jewelry. In the early nineties, he met a shop owner in Albuquerque that was willing to let him develop his own designs and then market them for him. Mace responded by creating his "silver feather jewelry." This is made up of hand filed rings, bracelets, earrings, and necklaces shaped like delicate feathers. He still enjoys making traditional Navajo style jewelry with turquoise and other semi-precious stones. The artist now lives in Albuquerque, New Mexico. 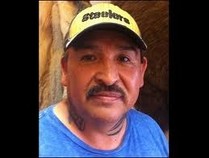 Kirk came from a well known family of silversmiths  and he began working with silver as a
youngster in the 1960's at his grandfather's workshop. He made jewelry off and on until 1980, when he returned to silversmithing full time, working with and learning from well-known artist and brother-in-law Harry Morgan. Kirk became an acclaimed artist is his own right by consistently creating investment quality old pawn style jewelry.  With heavy silver, detailed craftsmanship and beautiful stones, Smith's pieces won many awards through the years. Although he changed his style over the years, Kirk remained true to the traditional heavy silver work of the Navajo. At the time of his death, Kirk had surpassed his one-time mentor, the late Harry Morgan, becoming one of  the best practitioner of classic revivalist Navajo design.

Kirk always tried giving back to his people. He taught silversmithing to several other well known silvermsiths, including some of the Martinez family, Fred Brown, Dean Brown and Anthony Skeet. He also was one to help many Navajo different families whenever he could.

Kirk Smith was one of the best Navajo silversmiths in recent times. His work was always top quality and he used only the best stones and materials.

Kirk Smith was killed by a drunk driver in an unfortunate tragedy on September 17, 2012. He was only 55 years old and in his prime, both as a jeweler and as an individual. He will be deeply missed by family, friends and Native American Indian jewelry collectors and traders everywhere. 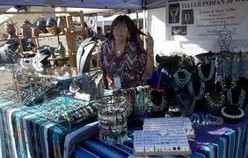 Mary and Everett Teller are a designer team currently living on the Navajo Indian reservation near the Four Corners. Their work usually incorporates sterling silver and/or 14K gold. Whether forged pieces or hand-wrapped chains, they always incorporate the storm pattern designs and embellish with high quality turquoise, coral, lapis, charoite, oyster shell, crystals and other precious stones. Teller Indian Jewelry not only creates hand-made jewelry, they will also showcase a collection of other items like silver pottery bowls, seed pots, miniature tea sets, and wedding vases.

Navajo artist Peter Nelson was born to Tsinnijinnie (Blackgoat) clan and for Copah (Water) clan in 1954 at Keams Canyon Hospital. He was named Peter by the doctor that delivered him. His mother, Jeanette Nez, was taken to the hospital by an uncle (Joseph Nelson) because Peter's father worked for the railroad and was not home. Mr. Nelson signed the birth certificate, so Peter's name became Nelson instead of Nez.

Peter grew up at White Cone, Arizona, attending school at Greasewood and Dilcon. He graduated from High School at IAIA (Institute of American Indian Arts) in Santa Fe, New Mexico. It was at IAIA that he learned silversmithing, painting, and sculpture. Though he is known today as a silversmith, he still produces one painting each year.

In the early 1980's Peter met Shirley George, who later became his wife. They are the parents of 3 daughters and have 2 grandsons.

Peter has shown his jewelry at the Santa Fe Indian Market, the Heard Museum in Phoenix, and the Museum of Northern Arizona. The MNA has awarded Peter's work as Best in show several times. He also has numerous awards from the Indian Market.

Today, Peter Nelson's unique style combining traditional and contemporary Navajo styles is enjoyed by many collectors around the world. His intricate overlay designs, some that incorporate 14K gold, are beautiful and popular expressions of his art.

Tribal Reflections
Unfortunately, we have closed our Santa Fe location. (Please check back we will continue to add our inventory to our website)

ONLINE SALES will be available soon.

By apptoinment only please call to set up a time.

We hope to see you soon!